Michigander (mish-i-gan-der): a native or inhabitant of Michigan, also Michiganian

Michigoslings/Meshugaslings (mish-i-goz-lings): how we refer to our sons who were born and raised in Michigan

Six emails, five administrators, one secure website and two phone calls: what is required to convince a premier Michigan university that one of said Michigoslings deserves in-state tuition 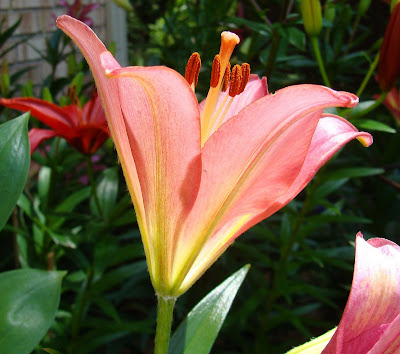 Photo by me.
I can't always find a gray treefrog, so here's a blossom-full of light. To be honest, though, I snapped a photo of a lily in profile. I didn't know the camera would see it this way.
Posted by Ann Finkelstein at 6:00 AM No comments:

I hate writing novel summaries for query letters. You know the drill: encapsulate the plot, elucidate the important characters and provide a hint of the voice in fifty words or three sentences, whichever comes first. Be enticing. Be compelling.

On the other hand, I love a good book trailer, a short, zingy message that makes me want to race to the nearest bookstore. So, I decided to make an imaginary book trailer for TAoCBS, even though that’s putting the cart way before the maverick manuscript.

I present three easy steps to an imaginary book trailer.

I liked the results. Will I use these lines in my query? I’ll decide when the time comes.
Posted by Ann Finkelstein at 7:08 AM 3 comments:

"The author suffers from what many of us suffer from - not being F. Scott Fitzgerald."
Posted by Ann Finkelstein at 6:12 AM 2 comments:

Thanks to Tim Bogar*, the frog in last Sunday's photo has been identified as a Gray Treefrog (Hyla versicolor or Hyla chrysoscelis). Here is some great information from the Department of Natural Resources on Gray Treefrogs. These frogs can change color to match their surroundings, but fortunately for my photograph, fuchsia is not in their repertoire.


*You can read some of Tim's ideas on our critique group's blog, Write Brainers.
Posted by Ann Finkelstein at 5:39 PM No comments: 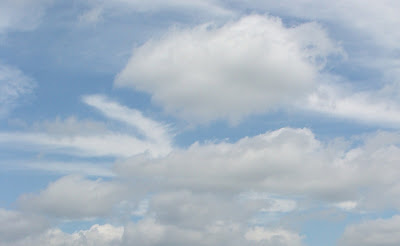 I wish I could tell you the idea for improving my stereotyped antagonist came while paddling our canoe under these amazing skies. 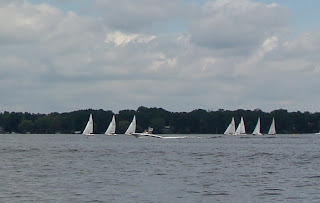 Watching these sailboats come about, drop their jibs and hoist bright spinnakers would have been a great inspiration for changing his personality.

But I got the idea while I was brushing my teeth.
Posted by Ann Finkelstein at 7:50 AM 2 comments: 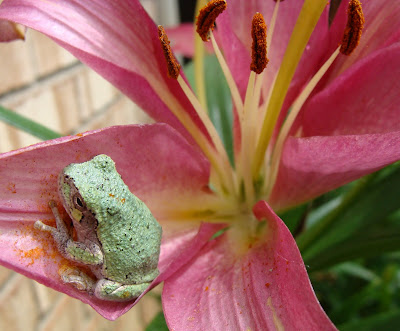 Posted by Ann Finkelstein at 6:00 AM 6 comments:

All on a Ten Mile Bike Ride

1. I swerved around the fattest, most self-satisfied toad in Michigan's lower peninsula. I didn't even scare it.

2. The County Sheriff smiled and waved (instead of giving me a ticket) when he saw me riding the wrong way on a one-way street. Ahem.

3. A doe stepped out in front of my bike, but nothing bad happened.

This must be my lucky day. I should buy a lottery ticket or send a query.
Posted by Ann Finkelstein at 2:20 PM 4 comments:

Things I Should Have Realized a Long Time Ago - Part 5

Kids have a lot to learn.

Earlier this week, I accompanied Jeremy to his first voice lesson. While I've taken many music lessons, none have involved singing. Breathing for singing involves the diaphragm, which is similar to playing a wind instrument, but the big difference is where the air goes after a breath. When playing a wind instrument, the air goes out the player's mouth, and the vibrations that produce the sound waves are made by the reed, lips or mouthpiece. The sound is then enhanced by the structure of the instrument. When singing, all that happens in the singer's body. I don't understand the bits about the back of the throat and the sinus cavities, but clearly, good singers do. The voice lesson contained a wealth of new information.

The other part of Jeremy's learning experience was driving to and from the lesson. Jeremy has a learner's permit and is currently logging his fifty hours of practice driving. When we got to the lesson, he parked on the curb. When we left, he had to make a three point turn (in my lengthy station wagon), which he did beautifully. Then he had to negotiate that that tricky section of road where two busy lanes suddenly become one.

I realized teenagers learn a ton of new stuff every day, and there isn't much of a break between each learning experience.
Posted by Ann Finkelstein at 8:35 AM No comments:

"We're striving to improve on reality."
Posted by Ann Finkelstein at 6:00 AM No comments:

Math is in the news today!

A new prime number has been discovered by Odd Magnar Strindmo from Melhus, Norway. It is 13 million digits long, so I won't display it here. It is a Mersenne prime number which means it can be calculated from the equation:

where n is a prime number.

The calculation required a lot of computing power (because the values for n are so large) and was aided by the Great Internet Mersenne Prime Search (GIMPS). People can download software onto their personal computers to help with the calculations.

Posted by Ann Finkelstein at 6:38 AM 4 comments:

This Is the Way We Wash Our Clothes

I’ve been giving laundry lessons to my college-bound son.

"Could I get this in writing?" he asked.
Posted by Ann Finkelstein at 6:19 AM 2 comments: 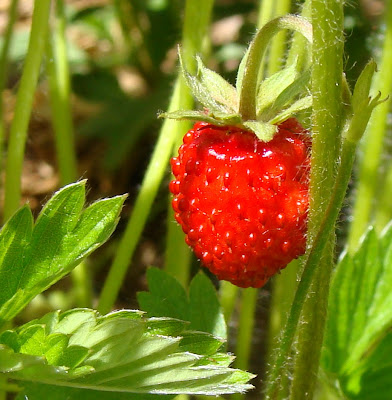 Just when I thought it was safe to declare I'd finished the second draft of TAoCBS, a new idea wormed its way into my brain. It addresses a couple problems with the manuscript, and fits nicely/eerily/amazingly into the rest of the story.

One problem with the manuscript is Troy (our hero) is a bit of a victim. Other characters do mean things to him, and he suffers. But Troy has to fight back, and my new idea provides him with a chance at revenge. Of course his plan will backfire (at least once), and Troy will again suffer. As a protagonist, suffering is Troy's job. If he wanted an easy life, he should have auditioned for a different role.

Another problem is the second draft, at 23,800 words, is almost as scrawny as our hero. While the new idea will not bulk up my manuscript as much as a summer in the weight room, it is a start.

Back in May, Debbie Diesen proposed The Lazy Person's Reading Group on her blog. I don't have entries for all 11 categories, but Debbie suggests trying for five. Here are my seven.

3. A book by someone whose last name begins with Z.
Once Was Lost by Sara Zarr. This book was recommended by Sarah Miller who read the ARC. The book hasn't been released yet, but I guess The Lazy Person's Reading Group won't rush me.

4. A book from a genre you rarely, if ever, read.
My Father's Secret War: A Memoir by Lucinda Franks. I usually don't read memoirs. Why not?

7. A book you figure you probably should read, even though you don't really want to.
His Dark Materials by Philip Pullman. Everybody recommends these books, but somehow, I've never read them. I'll start with The Golden Compass and see how it goes.

8. A book that has recently received rave reviews.
I'd Tell You I Love You But Then I'd Have To Kill You by Ally Carter. I see this mentioned everywhere.

10. A book that pertains in some way to a skill you do not, and never will, have.
Another Day in the Frontal Lobe: A Brain Surgeon Exposes Life on the Inside by Katrina Firlik. I stole this from Debbie's list, and I'm not ashamed.

11. A book recommended by your hairdresser or barber.
Water for Elephants by Sara Gruen. The woman who cuts my hair says this is great.
Posted by Ann Finkelstein at 9:11 PM No comments:

"The whole thing reads like a train wreck that I have to watch."
Posted by Ann Finkelstein at 7:01 AM No comments:

Quote from Tomorrow The River 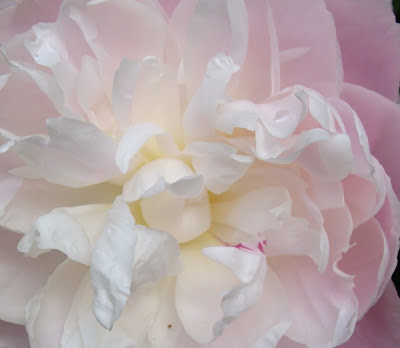 TAoCBS has been difficult to write. Most days, I feel like each letter has to be whittled into wood or formed from clay. Words do not flow easily or quickly with this one.

I'm proud to announce that The World's Greatest Critique Group likes it - so far. They told me so today. If I listened very carefully as they made their comments, I could almost hear music playing in the background.
Posted by Ann Finkelstein at 7:58 PM 3 comments:

Step Away from the Computer and No One Gets Hurt

The frustration level on one aspect of a writing project had reached a zenith, and yesterday, I needed a break.

Did I travel to a large body of water and listen to soothing splashing sounds? No.
Did I walk in the woods, letting birdsong and rustling leaves calm my soul? No.
Did I ride my bike so all that pent up anxiety could be expended as energy? No.

I cleaned my house, weeded my flower garden and reseeded some bald spots in the lawn. At the end of the day, I could say to myself (for a change), "Look how much I accomplished!"

Now it's time to get back to work on the hard projects.
Posted by Ann Finkelstein at 6:37 AM No comments:

The bad news:
I still don't have an enticing summary of CBL for my query letter.
The good news:
I'm going to put that project away for a few days (or possibly a few weeks or months). I can stop banging my head on the monitor.

The bad news:
I haven't written much lately.
The good news:
Life has been full of joyous events, like my older son's high school graduation and my 25th wedding anniversary.

The bad news:
The beautiful ash trees in our yard have been reduced to enormous piles of logs.
The good news:
Our neighbor has stopped brandishing firearms at the tree trimmers. We (and probably several future generations) can look forward to numerous fires in the fireplace.

The bad news:
I can't think of a downside to this one.
The good news:
The World's Greatest Critique Group meets on Saturday.
Posted by Ann Finkelstein at 6:08 AM No comments:

"There are people at my school who think London and Paris are countries."
Posted by Ann Finkelstein at 6:45 AM No comments:

The message in my fortune cookie read:
"Truth can be harsh, but it can be helpful."

Or as Hamlet said:
"I must be cruel only to be kind;
Thus bad begins, and worse remains behind."
Posted by Ann Finkelstein at 12:44 PM No comments: