Packing the Car for Boston

I Took A Lot of Pictures of This Butterfly 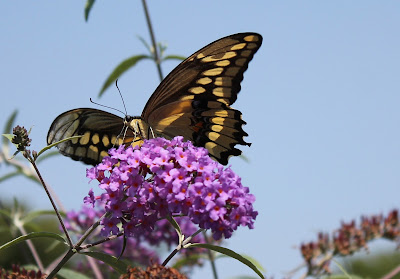 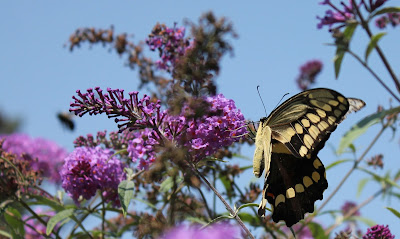 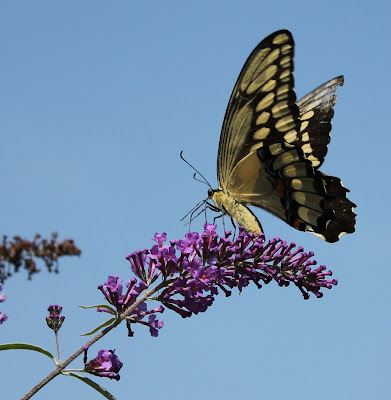 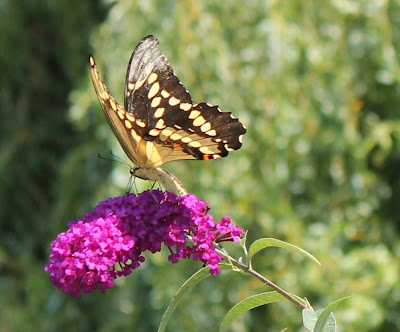 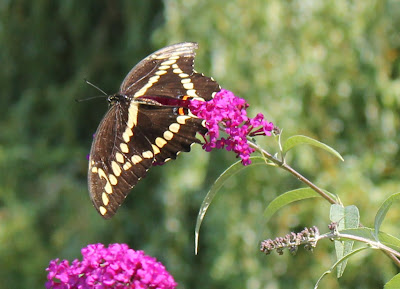 And this is only a few of my collection.
Posted by Ann Finkelstein at 3:22 PM 5 comments: 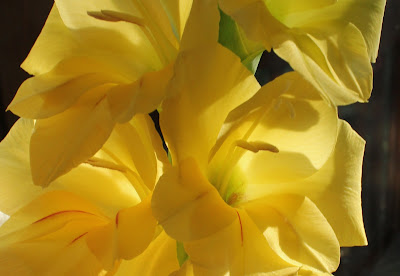 Stay tuned for pictures of butterflies in the next couple days.
Posted by Ann Finkelstein at 3:41 PM 2 comments:

Archaeologists analyzing food remains on the inside of ancient pottery discovered that 6000 years ago humans seasoned their food with mustard seeds (article). From other food remains in the pottery shards, they can tell that the mustard was added to meat from land animals and marine life as well as starchy plants. Mustard is not a significant source of calories or nutrients, so the seeds were probably a flavor enhancer. Previously, the earliest known use of seasoning was 4500 years ago in Northern India where turmeric and ginger were used.

No actual mustard can be found in the pottery after 6000 years. Scientists studied phytoliths, silica crystals that remain when plants decay, and determined the phytoliths are characteristic of mustard plants.
Posted by Ann Finkelstein at 7:34 AM 2 comments:

A Picture Speaks a Thousand Words

Today, I graphed the numerical ranking vs. line number. Deciding to embark on the hero’s journey was neither straightforward nor easy.

Since my numerical analyses make some you crazy, here’s Herbie Mann covering If (a Picture Paints a Thousand Words) by Bread.

Speaking of pictures, that album cover was ranked one of the worst of all time.

In Case You Were Worried About Running Out of Insects 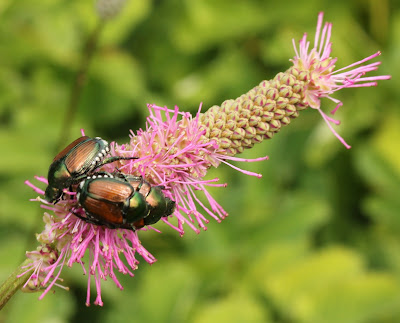 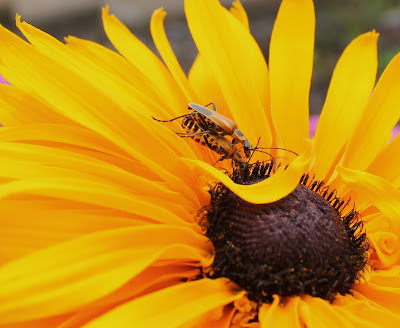 Adventures in YA Publishing has a great post by Sonya Sones on writing dialog.
Posted by Ann Finkelstein at 6:39 AM No comments: 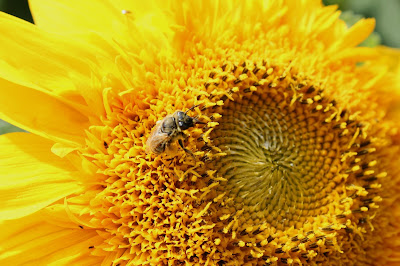 This file is a bit larger than I usually post. Please leave a comment if it takes too long to load.(Or leave a comment anyway.)
Posted by Ann Finkelstein at 6:33 AM 2 comments: 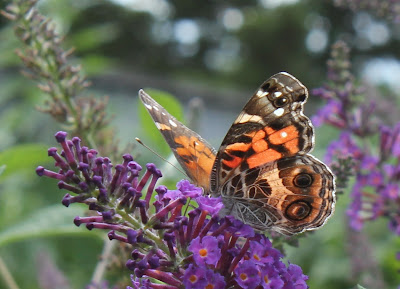 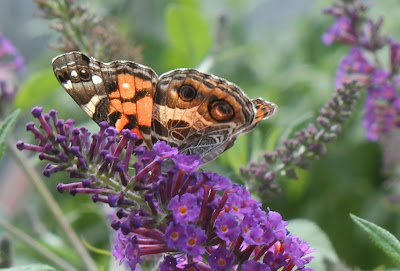 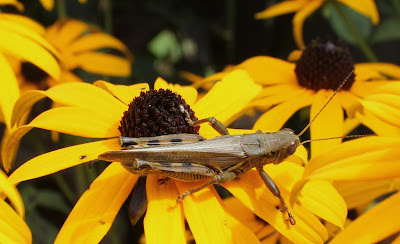 Posted by Ann Finkelstein at 7:12 AM 3 comments:

"We can be sensible later."
Posted by Ann Finkelstein at 6:24 AM 2 comments:

Commitments are tough, especially for protagonists who are faced with embarking on the hero’s journey. My main character is no different. A recent critique of my novel mentioned my protagonist’s inner debate was too short.

After revising, I created a table to track my main character’s state of mind. I copied every passage that dealt directly this decision and pasted the quote into my table along with the chapter and page. Then I invented a scoring scale to monitor her feelings about the decision.

Of course some passages fell between these markers.

I learned she spends over 1000 words considering the problem. (I’m still waffling about whether this is enough.) Originally, her decision was postponed twice by interruptions. (I got rid of one interruption to reduce scene similarity.) The table allows me to see how she makes up her mind. Often it’s one step forward, two steps back. Perhaps that’s normal, or maybe she’s doing the cha-cha.
Posted by Ann Finkelstein at 9:01 AM 5 comments: 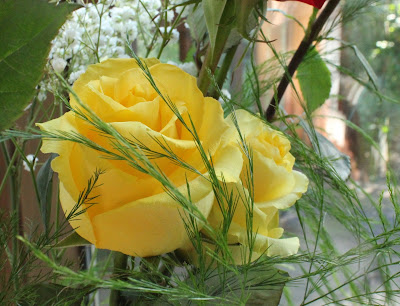 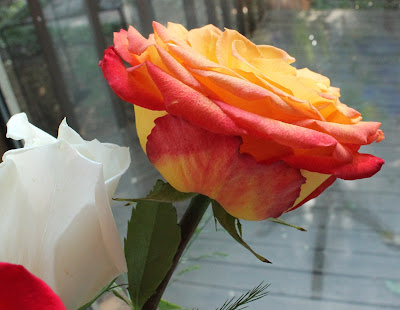 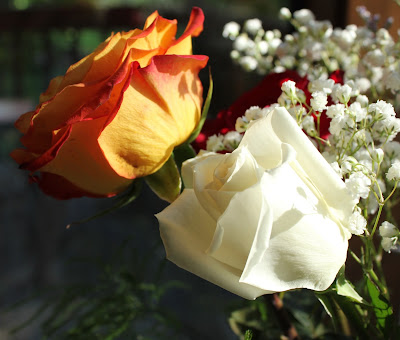 birthday roses
Posted by Ann Finkelstein at 6:00 AM No comments:

"Celebrate extravagantly."
Posted by Ann Finkelstein at 6:32 AM 2 comments:

Of Mice and Music

Today Jeremy was replacing guitar strings in the basement when a mouse ran across his guitar case and disappeared. When Jeremy came upstairs to tell me about it, I reminded him that his father is the mouse-control parent. Living in the woods as we do, discovering a mouse in the house is not uncommon. My husband catches them in Havaheart traps then releases them many miles from here, first providing a muffin for the mouse’s first meal away from home.

Once the guitar strings were replaced and Jeremy started practicing, the mouse came out again. At first, the little creature panicked and ran straight into Jeremy’s foot. After a while, the mouse got used to the music and sat listening. The mouse did not toss a sunflower seed into the guitar case and make a request, although that might happen at any time.

I know this isn’t a plot. There isn’t a problem. The mouse doesn’t try three times to solve it.

But isn’t there a picture book here somewhere?

Go ahead. Write it. Be my guest.
Posted by Ann Finkelstein at 9:40 PM 3 comments:

At the MSU gardens 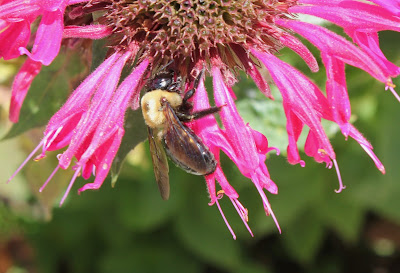 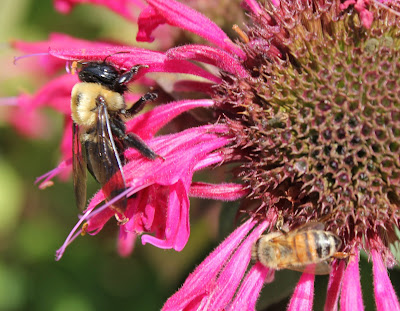 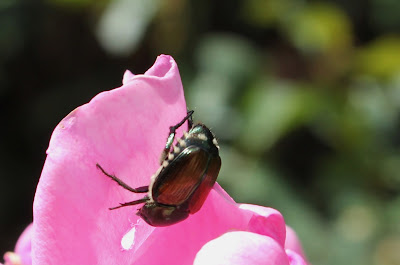 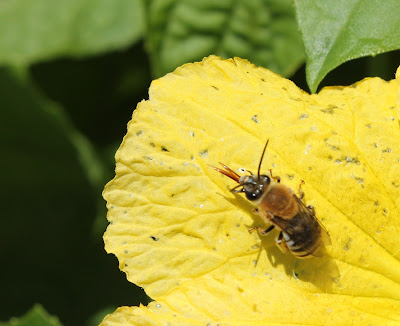 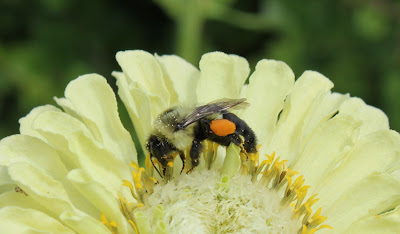 pollen sacs
Posted by Ann Finkelstein at 6:00 AM 2 comments:

"You can't ignore  the Universe when it offers you a gift."
Posted by Ann Finkelstein at 6:00 AM No comments:

Our backyard has no lawn whatsoever. Thanks to our giant oaks and a medley of smaller trees, there isn’t enough sunlight to support grass. I like it that way. Recently I’ve embarked on a project to create a woodland environment of ferns, brunnera, lily of the valley, astilbe, rhododendron, etc.

We do have a lawn in the front, but it suffers. Tannic acid from fallen oak leaves and acorns make the ground acidic, and lawns prefer a basic environment. Our large maple, with its abundant surface roots, steals water and nutrients from the surrounding grass. I’ve been threatening to take out the front lawn too. This article presents a convincing argument and beautiful alternatives to grassy yards.
Posted by Ann Finkelstein at 6:00 AM 2 comments: