"If these were easy problems, somebody would have solved them already."
Posted by Ann Finkelstein at 6:17 AM No comments: 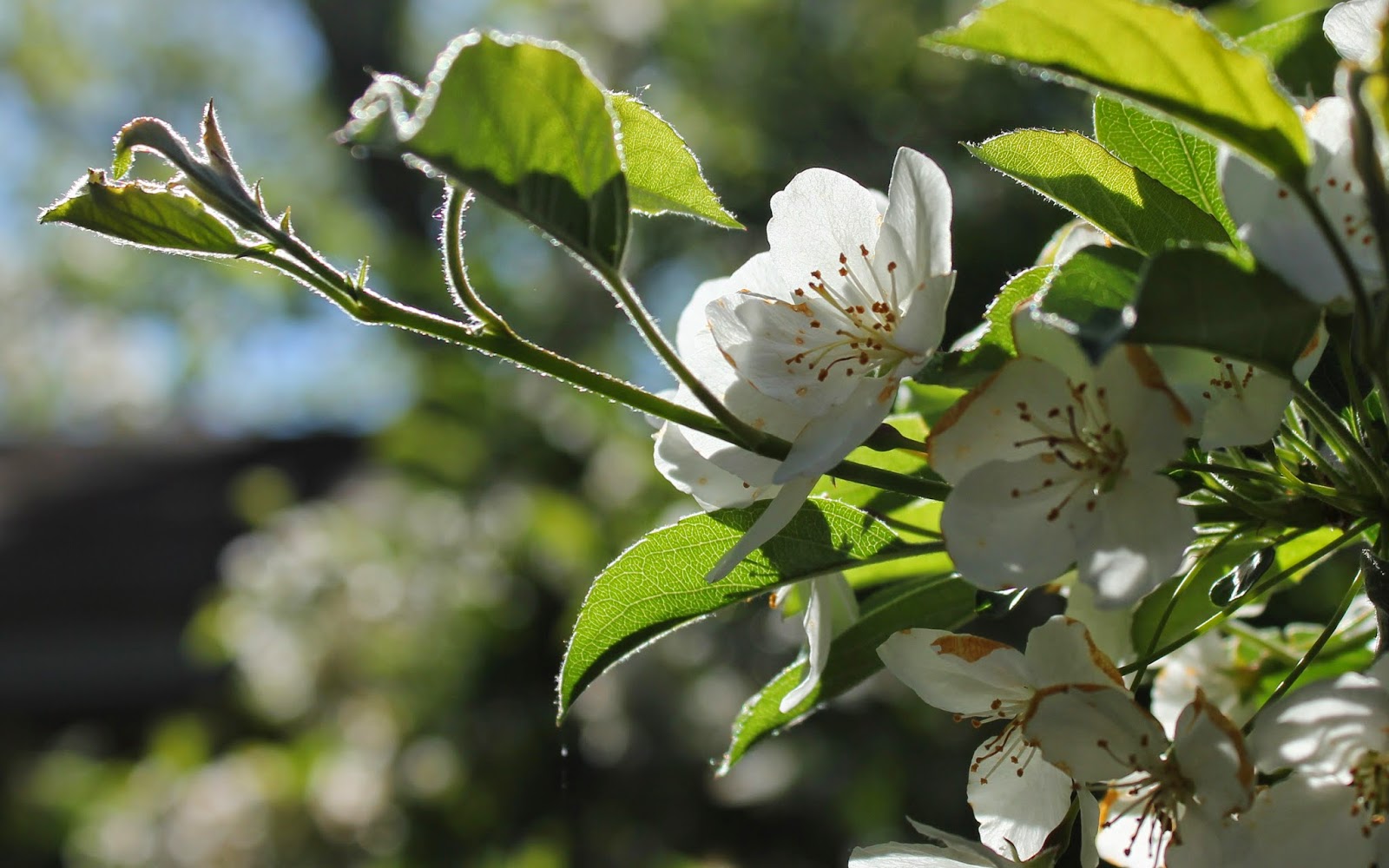 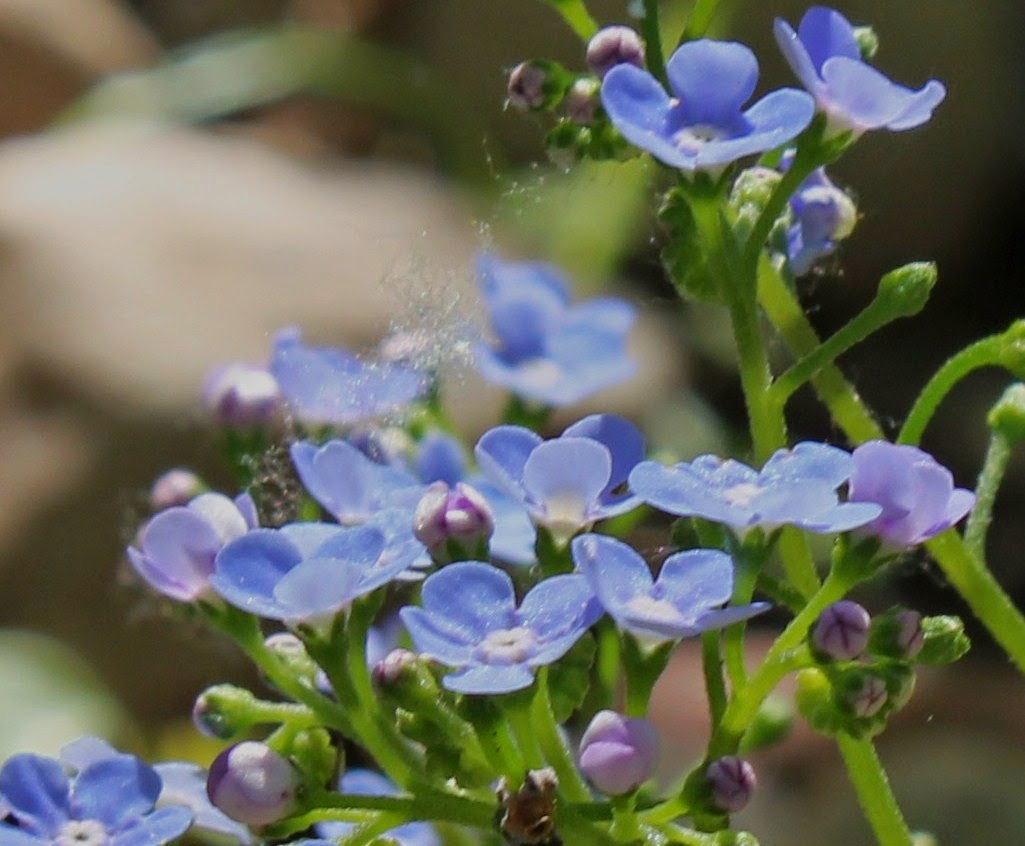 brunnera
I'm not sure what the sparkly stuff is - maybe a spider web. 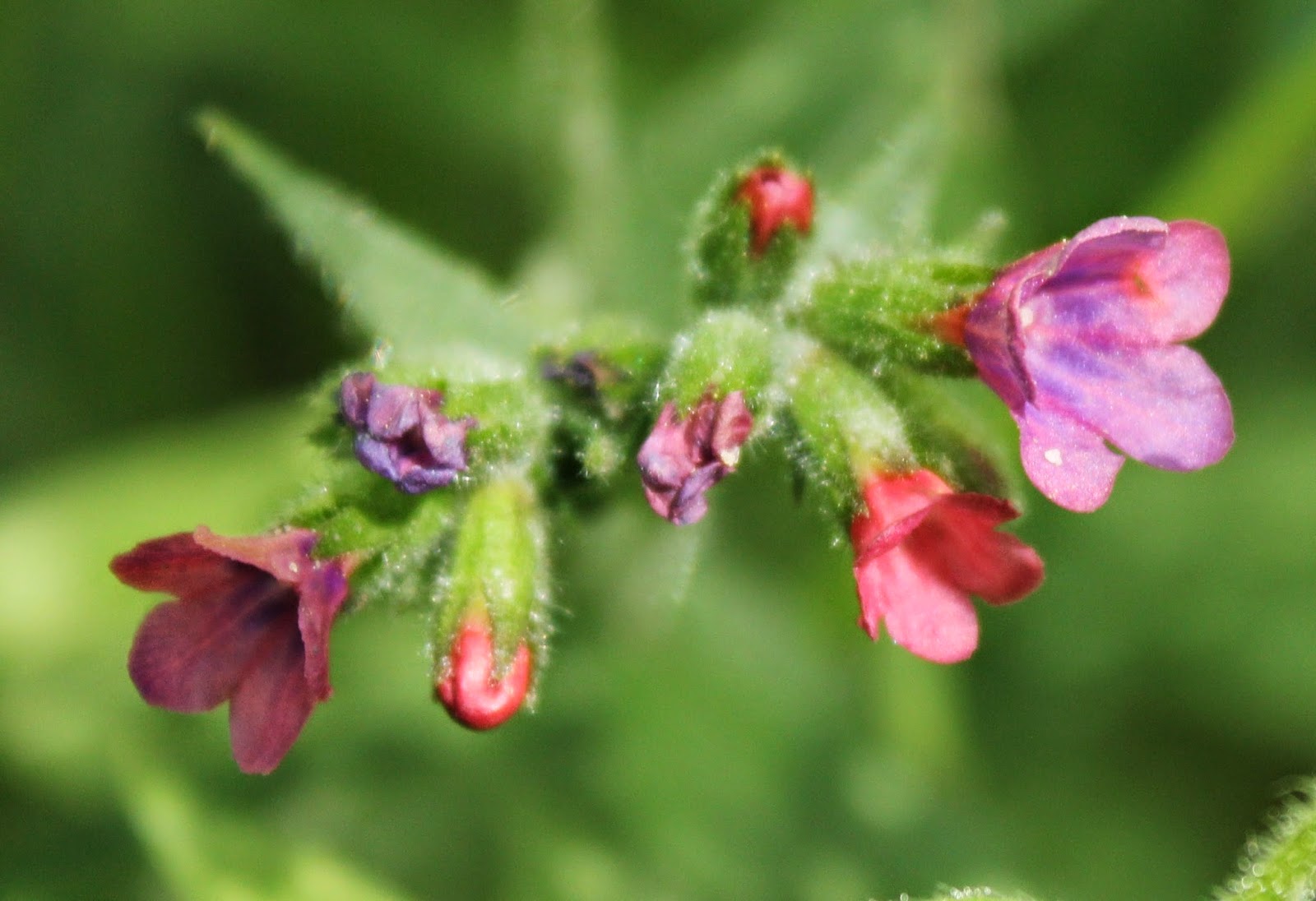 pulmonaria
The blossoms change color as they mature. 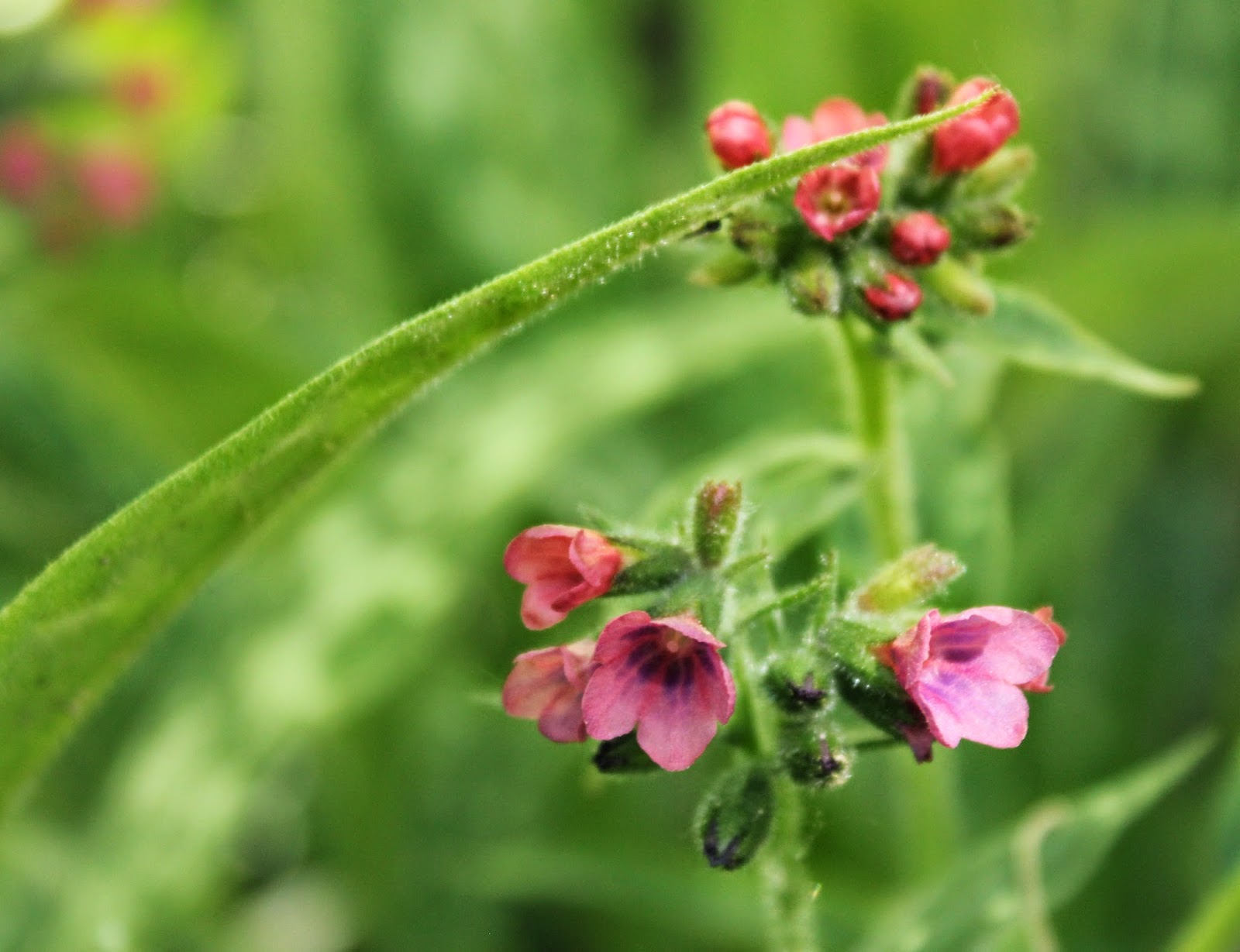 In 2011, I wrote about an incident in which the Justice Department raided Gibson Guitar Company on the suspicion that they had used endangered woods to make modern guitars. Insightful comments from Wyman Stewart stated that many musicians use heirloom instruments that have unknown provenance. Apparently, even instruments with clear documentation can be subject to intense scrutiny when crossing borders. Two members of Pro Arte Quartet, a world-renown string quartet, were recently detained at Belgium Immigration because their antique instruments were made from now-endangered woods and the bows contain small pieces of ivory (link).

While killing endangered animals or harvesting endangered trees to sell their products for profit is despicable, antique instruments were made before these trees or animals were endangered and before alternate substances were available. Although the instruments and bows in question have their own passports, the musicians were still detained until Belgian friends were able to contact the cabinet minister who oversees the Convention on International Trade in Endangers Species of Wild Flora and Fauna.

This story had a particular poignancy for me. On our way back from Boston, we were chosen by the US Immigration Service for a “random” check – probably because we had four guitars in our station wagon. For us, it only meant a slight delay in our drive, but we decided to take the southern route around the Great Lakes in the future.
Posted by Ann Finkelstein at 7:24 AM 2 comments:

"We live in the swamp, but we're not that proud of it."
Posted by Ann Finkelstein at 9:37 AM No comments:

Spring is coming slowly to Michigan this year because we live on a peninsula surrounded by partially frozen lakes. A few flowers have bloomed in my yard. 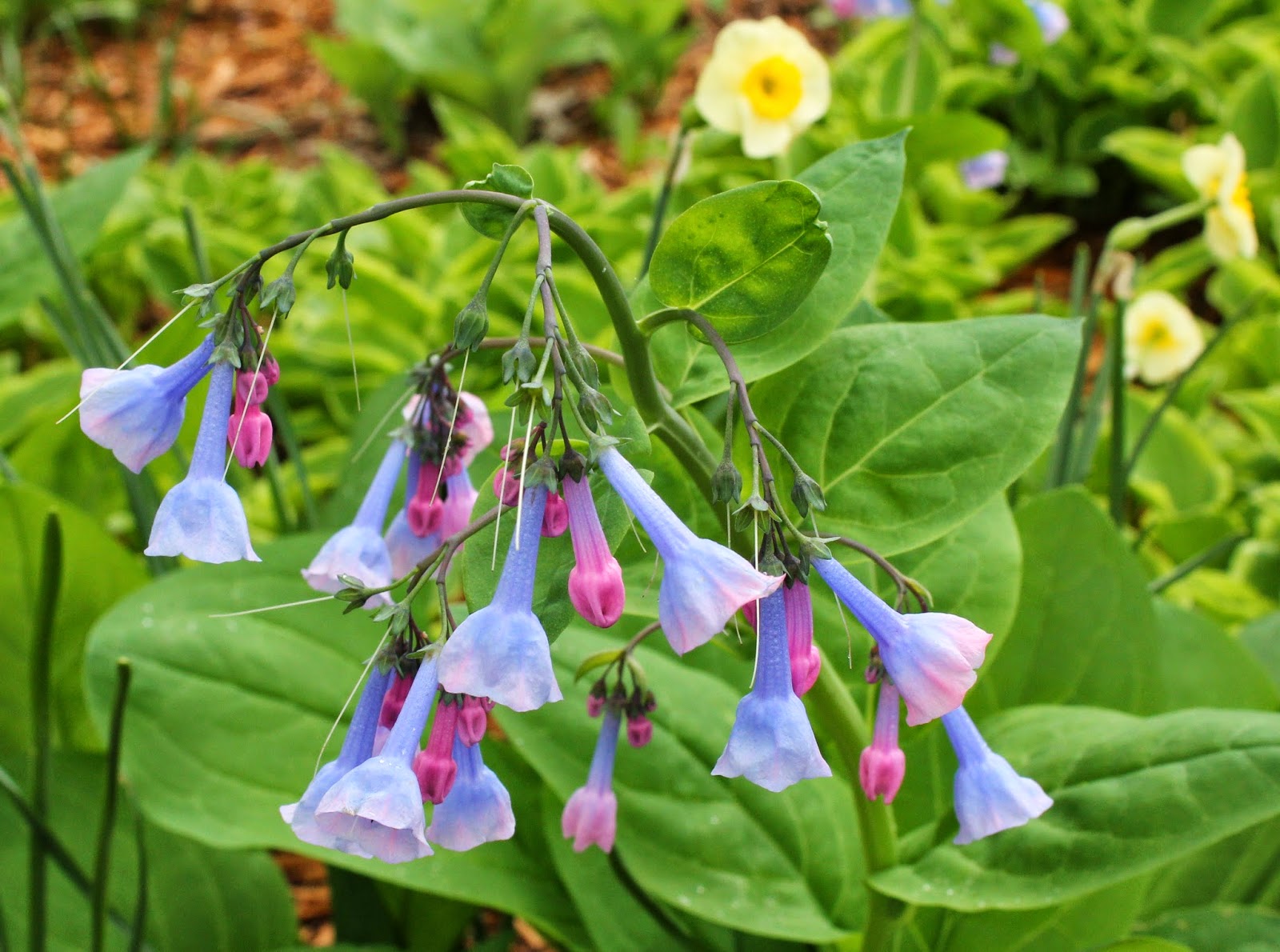 Virginia bluebells and a few daffodils 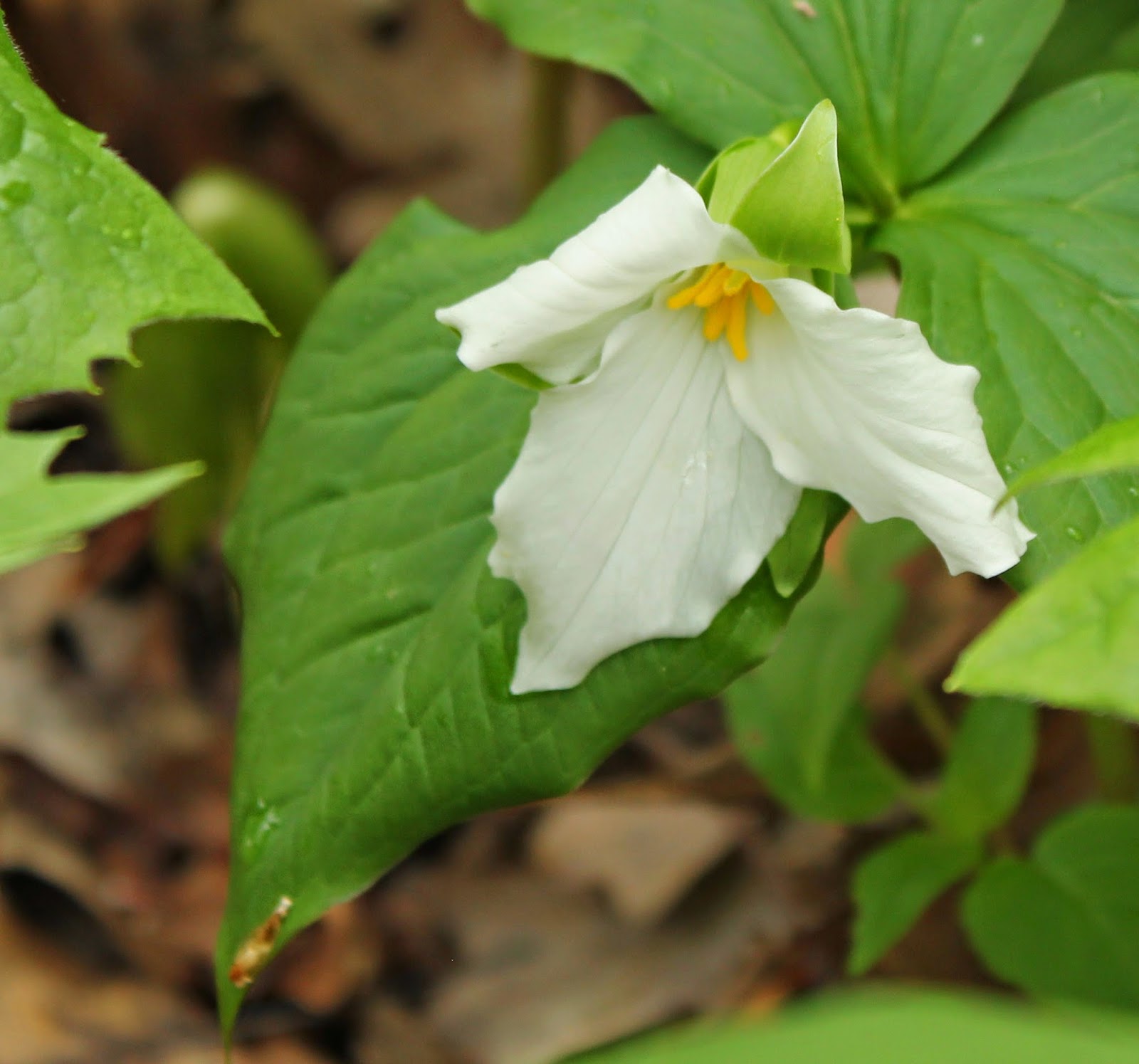 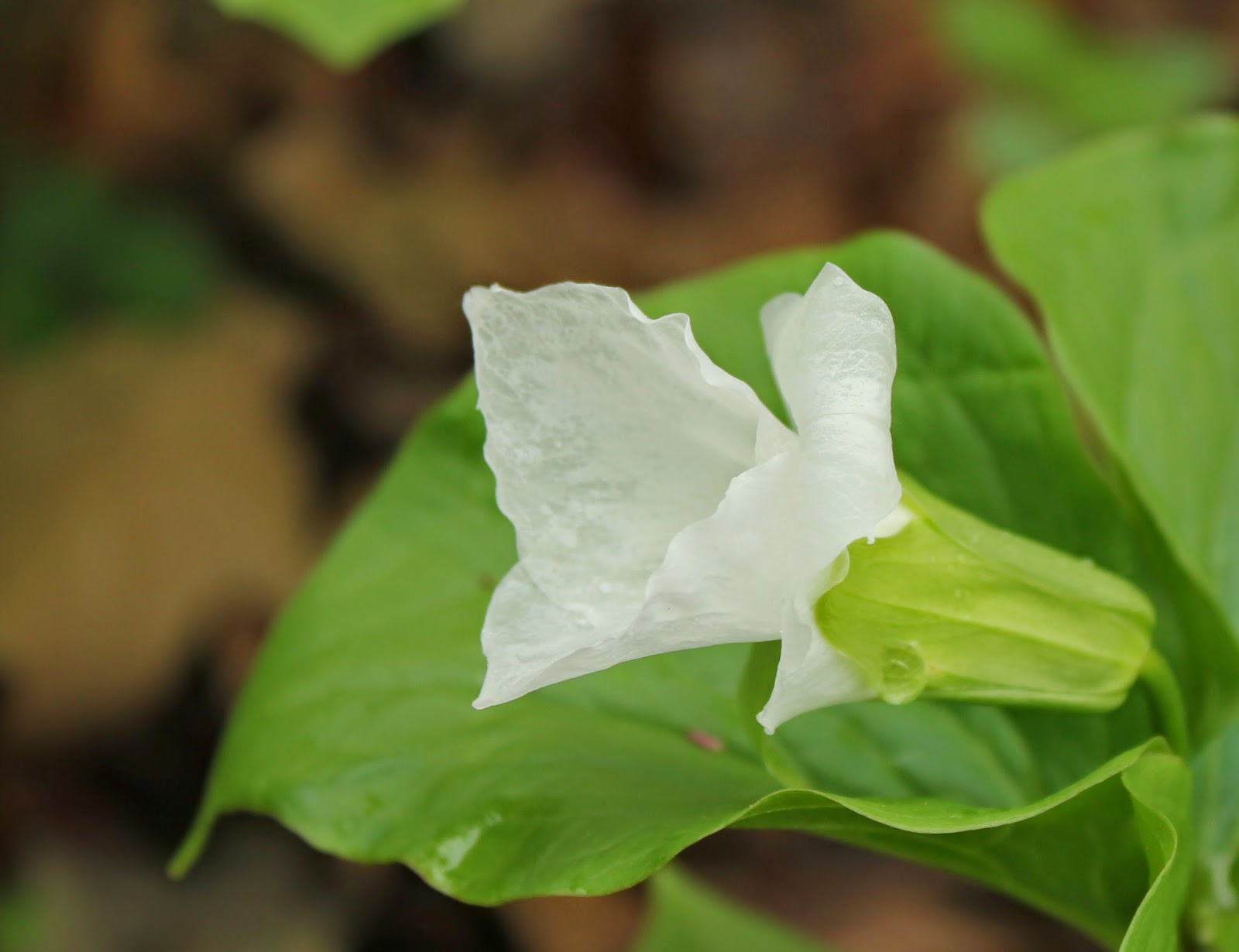 a trillium unfurling
Posted by Ann Finkelstein at 6:27 AM 1 comment:

"There's a little bit of genius in all of us."
Posted by Ann Finkelstein at 6:00 AM No comments:

I have not abandoned Words and Pixels, but life has been busy. My older son graduated from the University of Michigan in Pure Math. My younger son completed his first year at the Berklee College of Music in Boston – and needed us to drive him back to Michigan. I’m doing the penultimate revision (before submission) of THE WIND DJIN, tutoring for the ACT, and noticing my garden is full of weeds.

While I’m contemplating a real blog post, I’ll direct you to agent Jill Corcoran’s blog. Martha Alderson is offering a video series, “How to Revise Your Adult, YA or MG Novel.” I haven’t seen this video, but I did watch an excellent YouTube series by Martha on plotting.

Also Deborah Halverson’s blog, Dear Editor, has a series of interviews with such luminaries as Marla Frazee, Jean Ferris, Joni Rodgers, Warren Fahy and Denise Grover Swank. These are definitely on my to-read-soon list.
Posted by Ann Finkelstein at 8:45 AM 1 comment:

"The best way to be a good mentor is to have good protégés."
Posted by Ann Finkelstein at 6:00 AM No comments:

According to NPR, honing my digital photography skills and learning to use Photoshop will keep my memory sharp. I have started to learn Photoshop. My proudest moment was removing an advertisement for a biker bar from one of the pictures on my website. Unfortunately, my forays in to the mysteries and miracles of Photoshop had to be postponed so I could battle my way through an ACT preparation book. My tutoring responsibilities have expanded to include a student who wishes to improve her score on this standardized test. Reviewing punctuation rules, algebra tricks and geometry theorems is not a problem. For me, the challenge is figuring out how to teach another person how to do ACT problems as quickly as possible. On the ACT, time is your enemy. Perhaps this isn’t an appropriate forum for my rant about the ACT. Have some spring wildflowers instead. 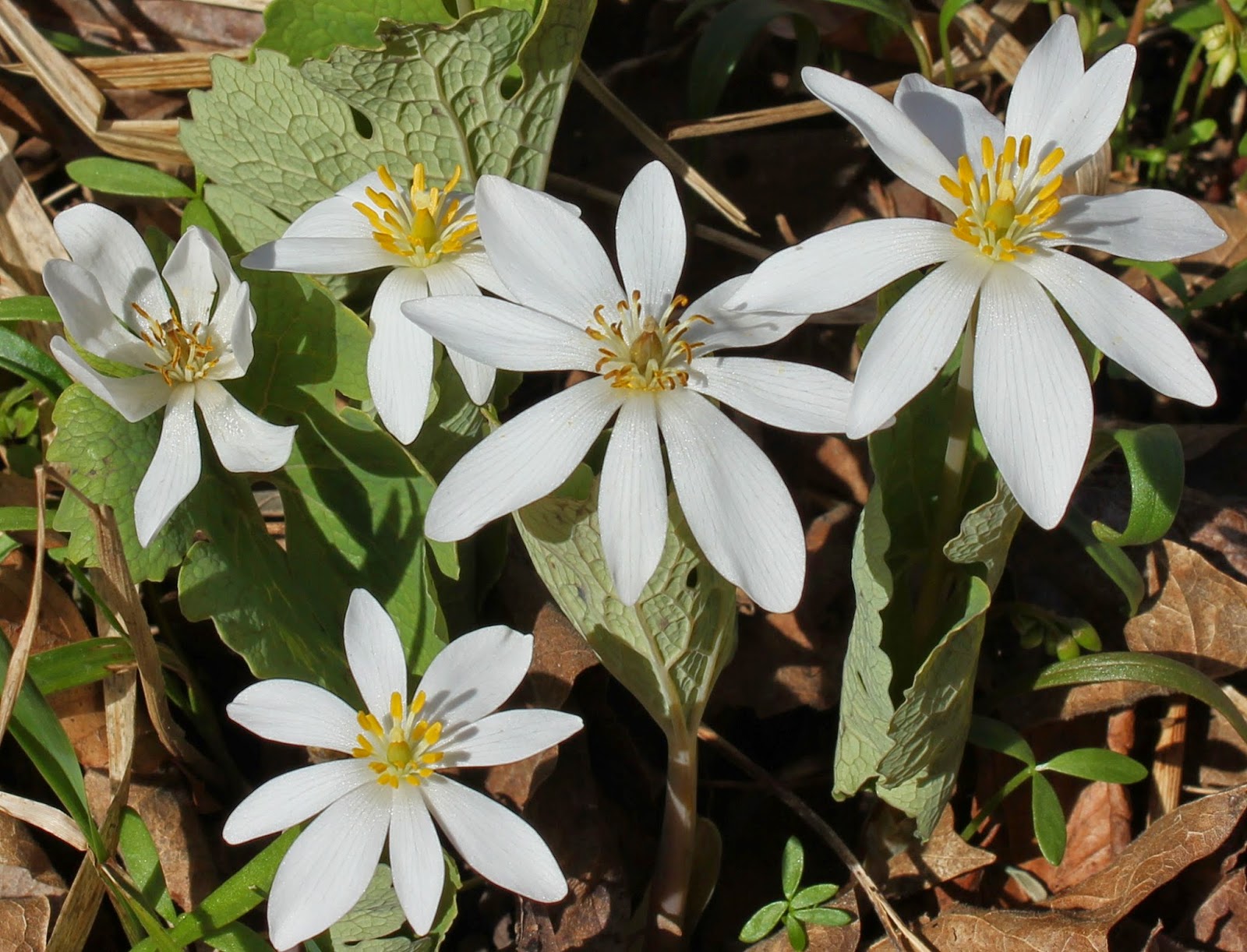 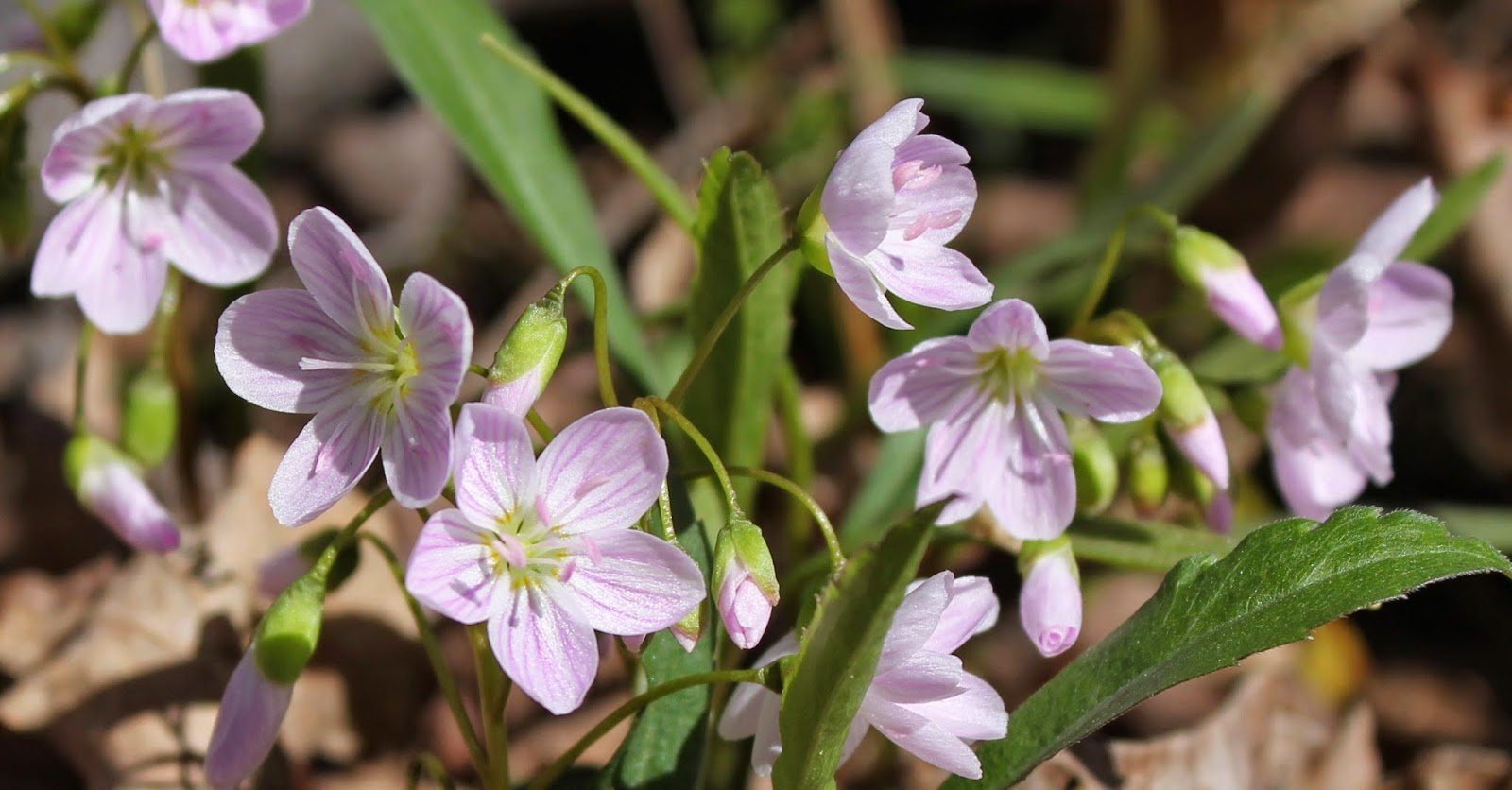 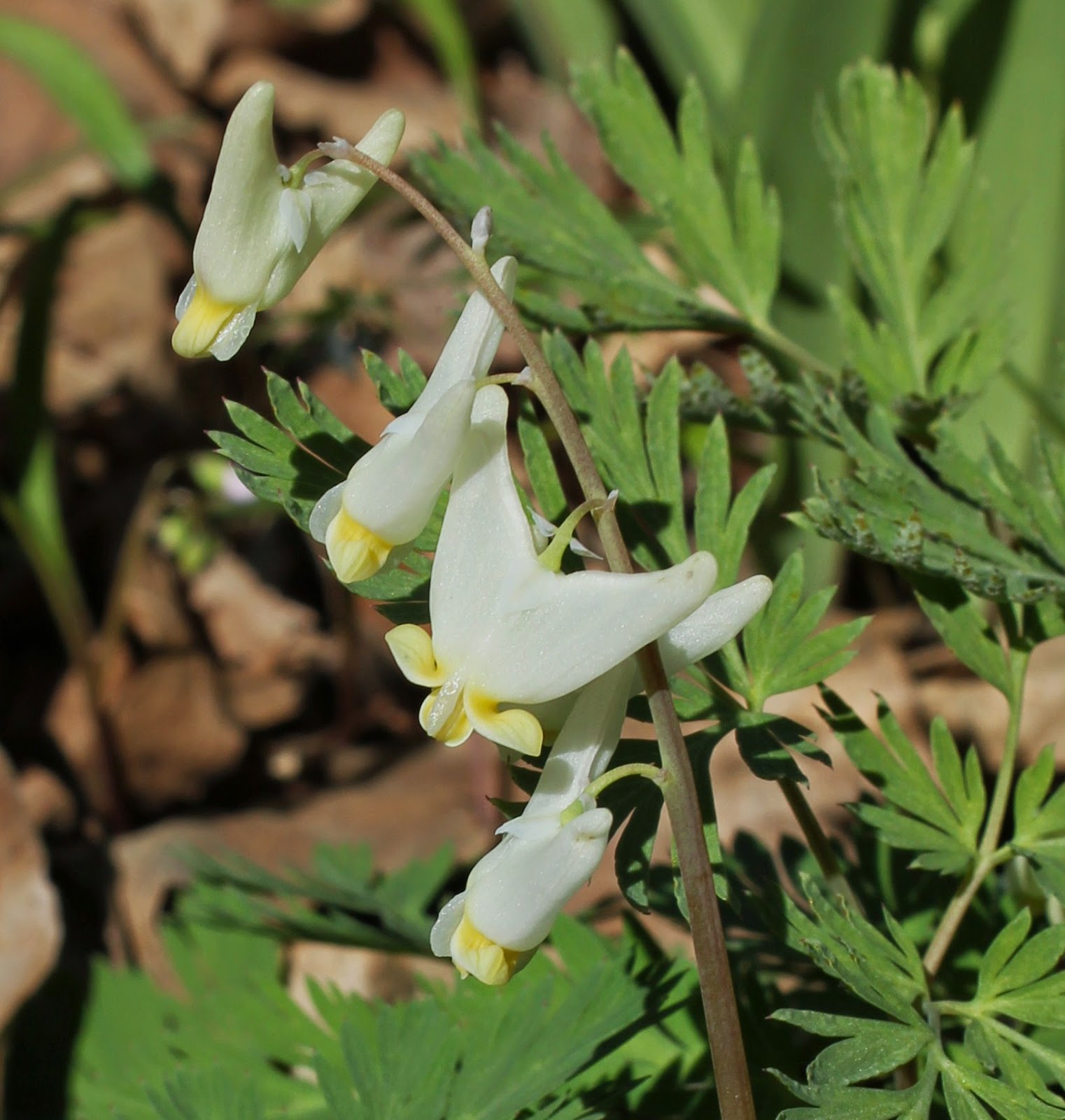 Posted by Ann Finkelstein at 7:31 AM 5 comments:

See What I Mean About Rhetorical Questions?

Many writers pepper interior monologue with rhetorical questions. They are a natural construct because it takes time for protagonists to figure out the plot’s mysteries. Stating a character’s confusion as a question avoids the “I wondered” construct which puts a degree of separation between the reader and the character. Simply stating what the character wondered (or felt, saw or smelled) is more direct.

Rhetorical questions can be effective if employed with a light hand. Use the search function in Microsoft Word to locate question marks in your manuscript. For every question that isn’t part of dialog, consider whether it can be cut or rephrased as a statement.