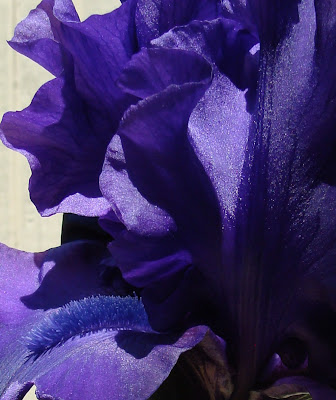 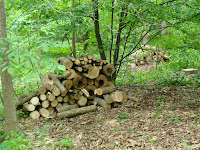 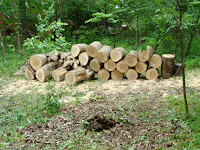 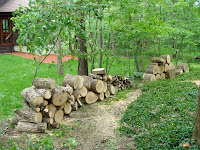 This wood came from tall beautiful ash trees that were killed by an infestation of emerald ash borer. We can't remove
the wood from our property because that can spread the disease.
Next winter, and every winter for the foreseeable future, we'll be having fires in the fireplace. The tree guys stacked the wood in weird places, but I guess my brawny lads can move it this summer. The squirrels are running around the stumps as if they're trying to figure out what happened. 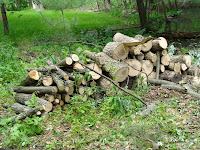 Posted by Ann Finkelstein at 3:34 PM No comments:

I am a strong advocate of high drama on the printed page. There's nothing like a strong plot and fast action to keep a reader glued to a book. I also believe a story is only as interesting as its characters.

On the flip side, I'm blessed with a fairly mundane existence. My quiet life lets me focus on the drama in my manuscripts. The people in my family are interesting to me, as any reader of this blog knows, but I don't put anyone I know directly into novels.

Today my life had some excitement. We're having several dead trees taken down. Our ash trees succumbed to emerald ash borer, and several yew trees died as well. The tree guys accidentally let one tree fall on the house, but that's not the exciting part. According to the boss tree guy, my neighbor came out of his house carrying a gun and told the tree guys to keep off his property. (That's the exciting part.) I didn't see this episode because I was typing away on TAoCBS at the time.

The tree guys don't want to call the police. The description of the firearm grows with each telling, so I'm trying to differentiate between fiction and nonfiction.

Who would believe this story if I put it in a manuscript?
Posted by Ann Finkelstein at 12:42 PM No comments:

"I challenge anyone to show me a book that is NOT about loneliness."
Posted by Ann Finkelstein at 6:00 AM No comments:

The Not So Good Idea

I love that feeling when a new idea sparks in my brain.

An entire novel burst into my mind yesterday evening. This concept is funny, exciting, clever ... (I could go on and on.) So what if I had to finish revising CBL and TAoCBS and write DB before I could get to it. The idea is stellar and will only improve on pondering.

In this manuscript, I could employ my knowledge of martial arts and nursing homes. What a combination!

This morning I rushed to my computer and began taking notes.

Then I realized the premise wasn't unique to me. It was the subject of not one, but three, feature length, well-publicised Hollywood films.

Better luck next time.
Posted by Ann Finkelstein at 8:56 AM 2 comments: 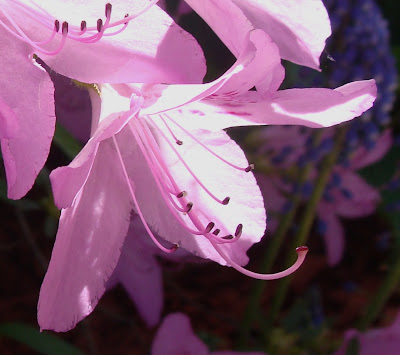 Photo by me.
Posted by Ann Finkelstein at 6:00 AM No comments: 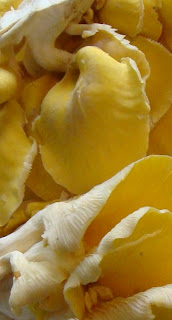 I bought these golden oyster mushrooms at the farmers' market this morning. We intend to eat them.

I thought I'd saute them in olive oil.

As my Grandma Gussie used to say, "So, what could be bad?"

A couple of my in-laws enjoy mushroom hunting. They say if you search for mushrooms, they are hard to see, so the best way to find mushrooms is to look for something else.

Sometimes, the same thing happens in revision. Finding the solution to a problem is easier if I'm not looking directly at it.
Posted by Ann Finkelstein at 10:55 AM No comments: 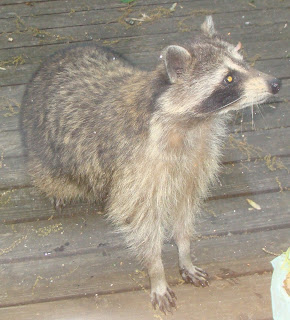 This little bandit stole my attention from chapter 12.

A few posts ago, I complained about the difficulty of photographing Taekwondo sparring matches. Wildlife also has an aversion to posing for the camera. And the flash flares on the window.

On to chapter 13.
Posted by Ann Finkelstein at 9:27 PM No comments:

When I moved my mom to Michigan, I had her mail forwarded to my address. The other day, a realtor from her former town sent a picture postcard announcing a house sale. In an odd coincidence, the house in the photo is only a short walk from where Lia, the protagonist of CBL, lives. The floor plan of Lia's house is almost identical to the house in the photo.

I like having the picture on my desk. It reminds me to get back to work.
Posted by Ann Finkelstein at 2:24 PM No comments:

"They took a short story and made it very, very long."
Posted by Ann Finkelstein at 6:32 AM No comments:

My Novel Was In the News … Sort of

Morning Edition on NPR reported that a magnitude 4.7 earthquake rocked the Los Angeles area on May 17 at 8:39 PM. It was followed by a micro-quake of magnitude 2.5 and an aftershock of 3.1. Fortunately, the quakes caused little damage and no serious injuries.

The announcer on NPR mentioned the oil refinery in El Segundo which also appears in Chapter 2 of CBL. See, I’m practically a celebrity.

If you click on this link to the LA News, you’ll see a map. Most of CBL takes place on that green peninsula.

My enthusiasm for this brush with fame is not shared by most news organizations. The article about the earthquake was not included on the NPR website, and The Daily Breeze, the small local paper I grew up reading, has already archived the story.
Posted by Ann Finkelstein at 7:17 AM No comments: 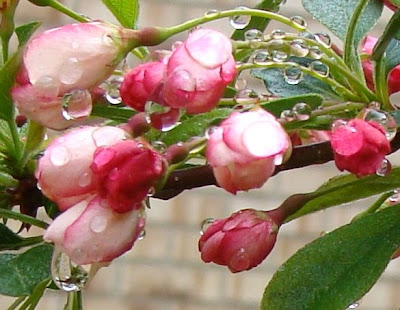 I'm not writing anything off today.

While it sounds wonderful to spend a gloomy Michigan Saturday typing away on CBL, I'm opting for the tortoise, not the hare, approach. At this point in the project, I need the best ideas, not the first ones to pop into my screen.

This morning while making my family's weekly dose of muffins, two separate conversations coalesced in my head to give me the beginning of a plan for fixing TAoCBS. Perhaps by the time this tortoise ambles back to TAoCBS, the rest of the idea will have solidified.
Posted by Ann Finkelstein at 12:08 PM No comments:

Let's put it this way. My GPS is finally programed for the correct address.
Posted by Ann Finkelstein at 8:50 AM No comments: 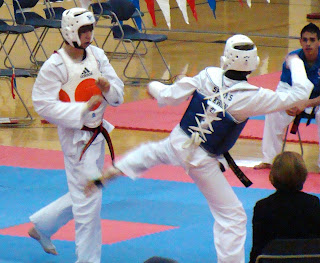 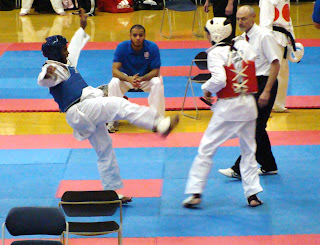 The master of my sons' Taekwondo studio says everyone, even the spectators, should learn much from attending tournaments. So, what did I learn from Saturday's state-wide Taekwondo tournament?
First, it is darn difficult to photograph sparring matches. The photographic subjects keep moving! The stands were too far away to get great shots, even with the zoom. Before I try this again, I shall learn how to use the motor drive on the camera. This sport is fast.
I also learned about perseverance. Sam competed against four Masters and did not place in forms or sparring. When asked later about the tournament, he said, "I'll just have to work harder," and listed a few areas he felt needed improvement.
In my revisions, I'm also working harder, and thanks to an amazing critique, I know what to focus on.
Posted by Ann Finkelstein at 8:56 AM No comments: 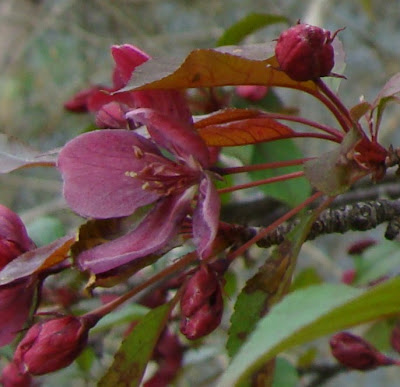 Some revisions are like taking medicine. They're good for the manuscript, and the end result will be improved novel health, but the side effects are tremendous. Many carefully crafted interactions get killed along with the novel's disease.

Recently on the advice of a wise woman, I started another revision of CBL. Her main idea seemed simple at the outset, but has far reaching effects on the story. To my surprise, the side effects make the novel better in ways that were totally unexpected. 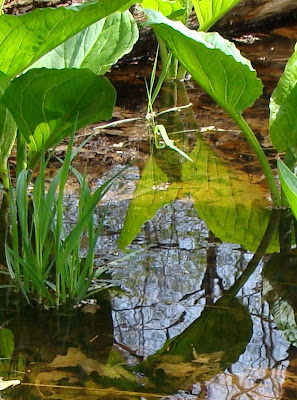 This link was sent to me by my friend Maia Cheli-Colando.
Posted by Ann Finkelstein at 8:11 AM 2 comments:

The March 19, 2009 issue of Nature (vol. 458, p. 333) reports a cool new proto-feathered dinosaur, Tianyulong confuciusi. Most of the feathered dinosaurs discovered so far are two-legged carnivores who nested on the branch of the evolutionary tree that led to modern birds. Tianyulong confuciusi belongs to the other major branch of dinosaurs that includes armored, horned, spiked and duck-billed species. Psittacosaurus is the only other dinosaur in this group known to have integumentary structures (fur, feathers, etc.)*. This implies that feathers evolved earlier that previously suspected, or both branches of the dinosaurs evolved feathers independently.

Tianyulong confuciusi’s feathers were not true feathers as are found on birds. They appear to be hollow filaments known as proto-feathers or “dinofuzz". These plant-eating dinosaurs were about the size of a cat and had long tails. The Not Exactly Rocket Science blog has an artist’s rendition of the dinosaur and some photos of the proto-feather fossils.

*Psittacosaurus had tail bristles.
Posted by Ann Finkelstein at 9:10 AM No comments: